Sloths are gentle creatures – their scientific name, Bradypus, means ‘slow feet’ in Greek. But many are being snatched from the wild for tourist selfies.

Found in Central and South America, sloths call the tall trees their home, as their long claws make it difficult for them to walk on the ground. Sadly, many sloths are being taken from the wild to be used as props for tourist selfies. This shock can cause them a great deal of stress and anxiety and can cut their lifespan to as short as 6 months, where normally they can live up to 40 years.

Read on to find out more about these unusual animals and why they belong in the wild. 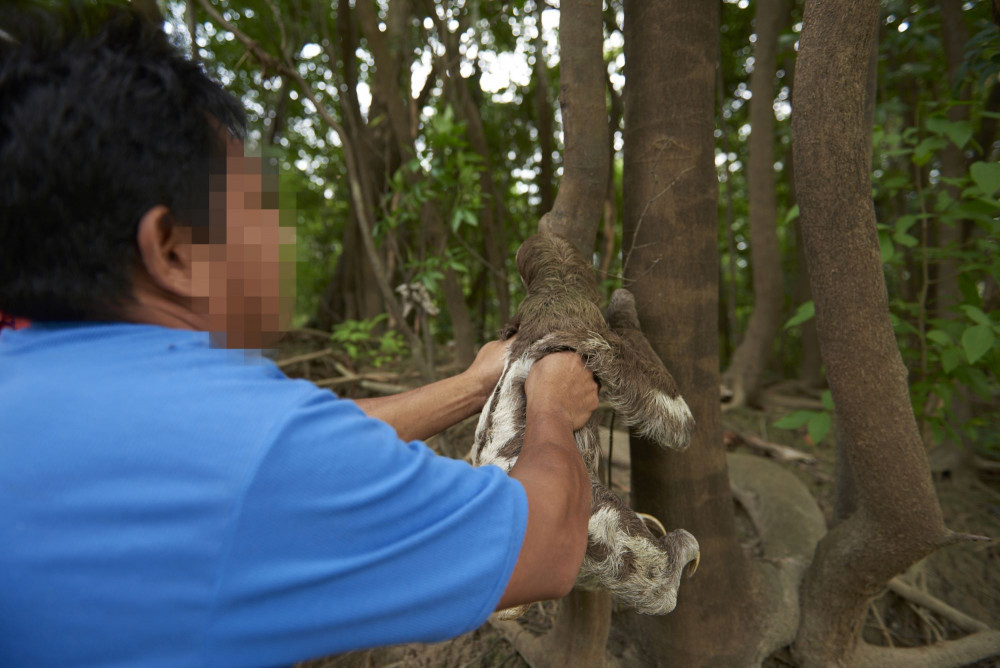 A man plucks a wild sloth from a tree to use it for harmful selfies with tourists, in Manaus, Brazil.

There are two types of sloth, two-toed and three-toed. However, this can get confusing as both types have three claws, or ‘toes’, on their hind limbs. In reality, the ‘two-toed’ sloth should really be called the ‘two-fingered’ sloth as the difference between them both can be found on their front limbs. 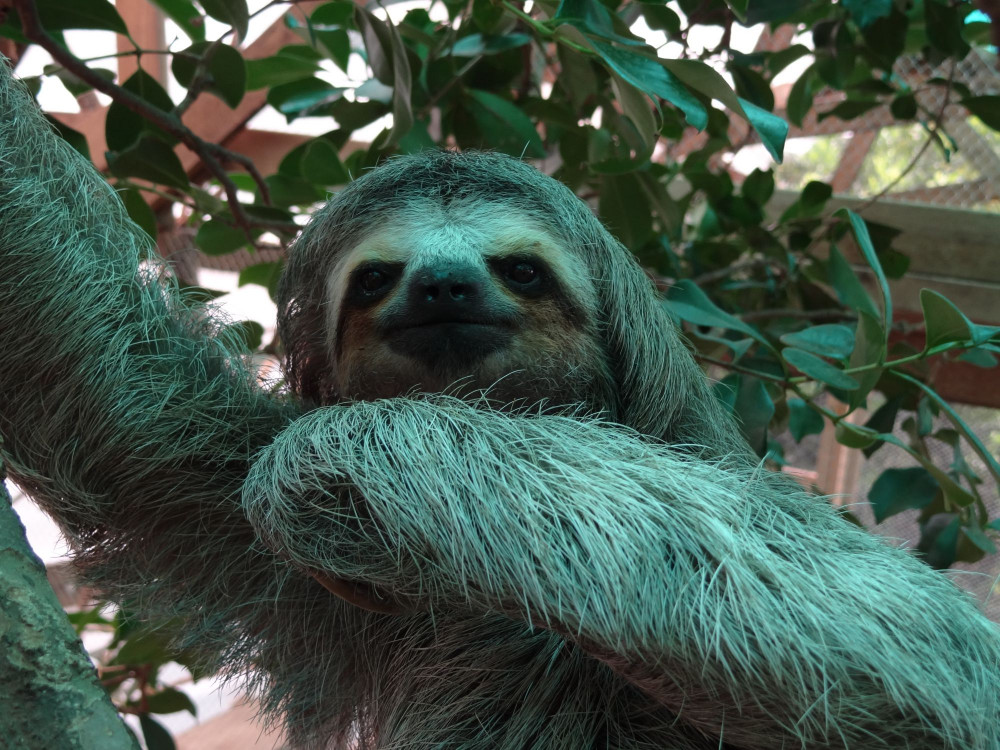 Lucky is a young adult three-toed sloth who resides at the AIUNAU sanctuary in Colombia after being rescued from captivity.

The modern sloth is usually around the size of a medium-sized dog. But ancient sloths of years ago, known as ‘Megatherium’, could grow as large as an Asian elephant! These giant sloths sometimes featured areas of small bone discs that would act as ‘armour plating’ for protection. They became extinct around 10,000 years ago. 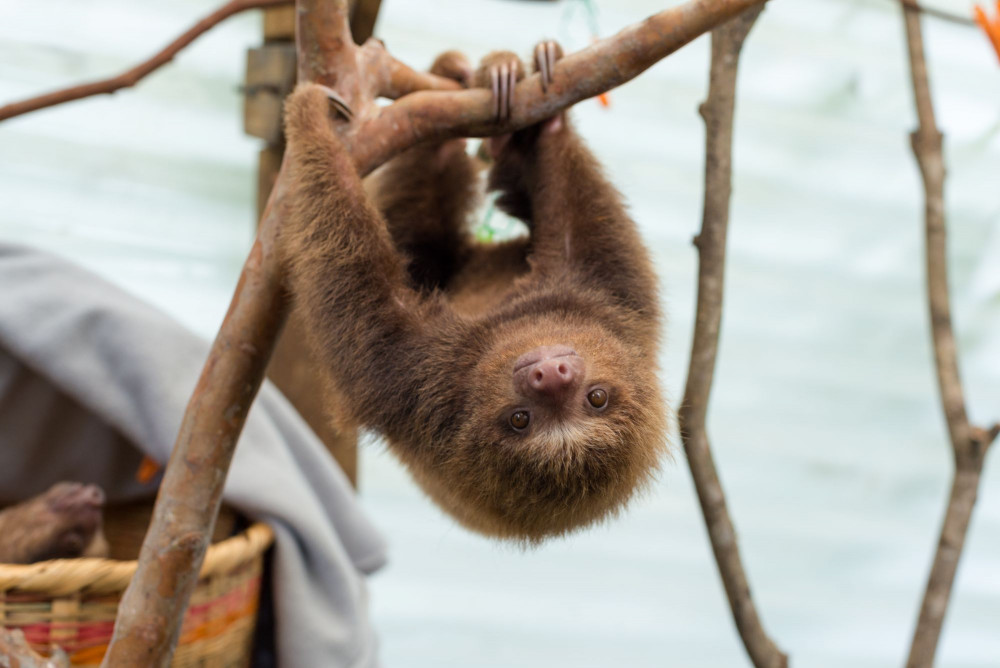 Princesa is an inquisitive two-toed sloth, also being looked after at the AIUNA sanctuary in Colombia.

Sloths possess a symbiotic relationship with the algae that grows on their fur. While the sloth provides the algae with shelter and water (as sloth fur is highly absorbent), the algae provide the sloth with camouflage as well as extra nutrients through their skin. 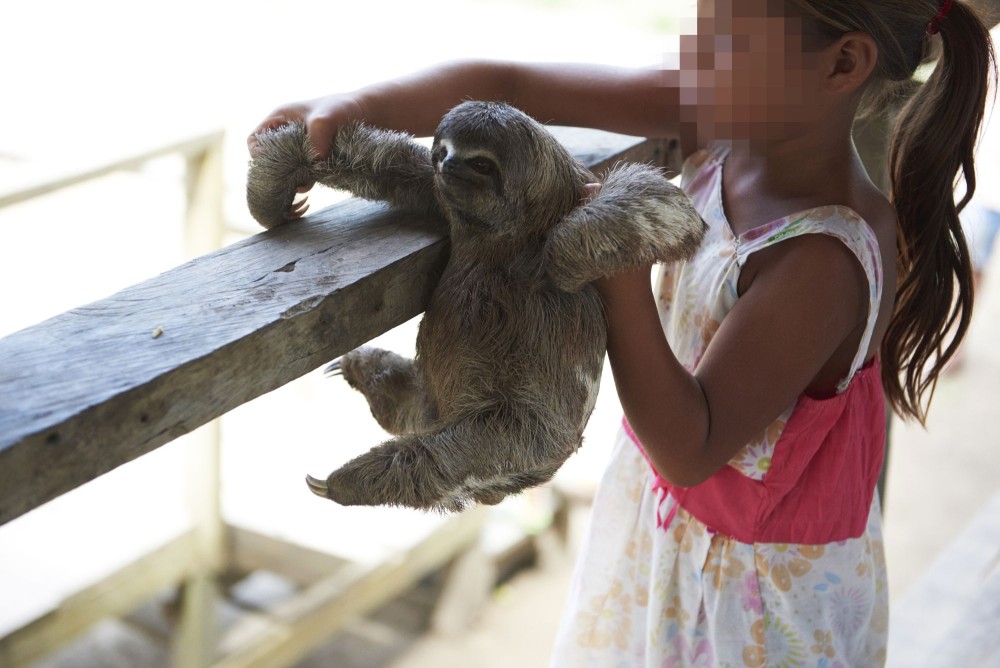 A sloth that has been taken from the wild and used for harmful selfies with tourists, in Puerto Alegria, Peru.

The impressive biology of a sloth allows it to spend 90% of its life hanging upside down. Studies show that this is made possible because their organs are attached to their rib cage, which means they don’t weigh down on the lungs. This means that, unlike us, a sloth can hang upside down with no affect on its breathing. 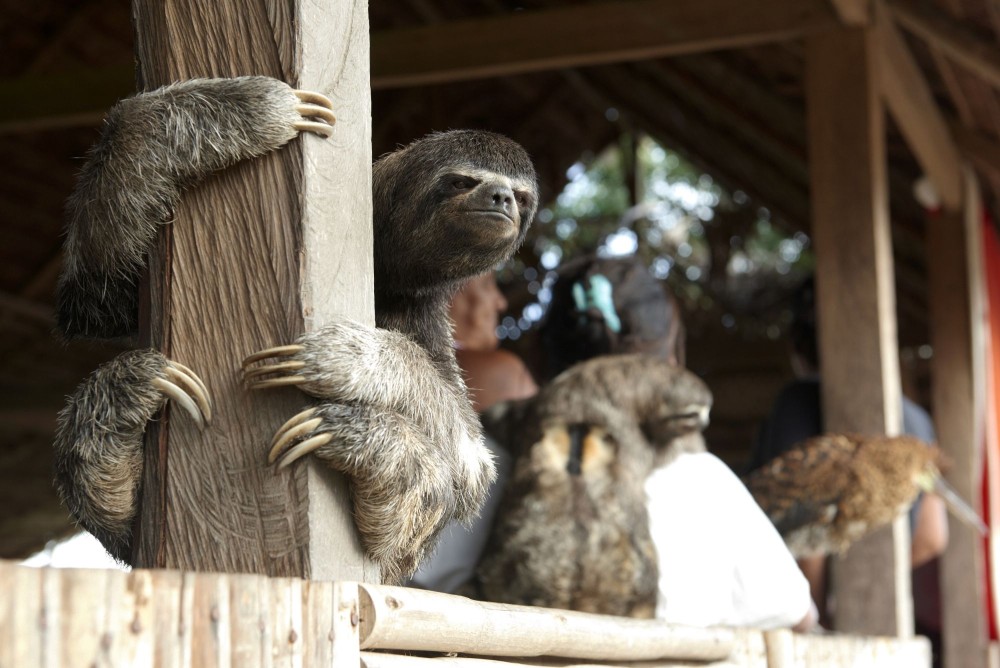 A sloth held in captivity in a tourist selfie venue in Puerto Alegria, Peru.

A sloth’s diet consists mainly of buds, leaves and tender shoots, although some sloths have been known to eat insects and birds to supplement their diet. They have a multi-compartment stomach that allows them to effectively digest the tough cellulose that they eat. This proves to be a slow process, taking 30 days to digest one leaf! 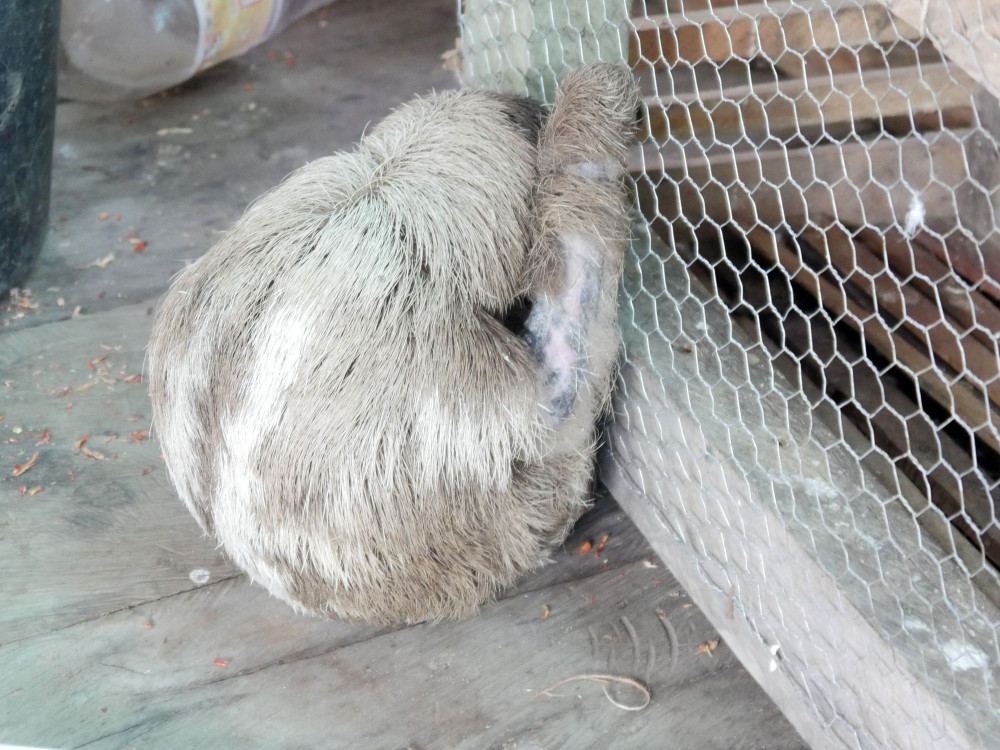 Sloths feel particularly vulnerable when they are on the ground. Operating undercover, World Animal Protection investigators obtained shocking images of the conditions sloths are kept in away from tourists' sight.

Sloths have an extra vertebrae at the base of their neck that allows them to turn their head on a 270° axis. This enables them to obtain an almost 360° view of their surroundings, which proves to be a highly beneficial defensive mechanism. This unique feature makes sloths stand out from other mammals whose bone structures do not allow this flexibility. 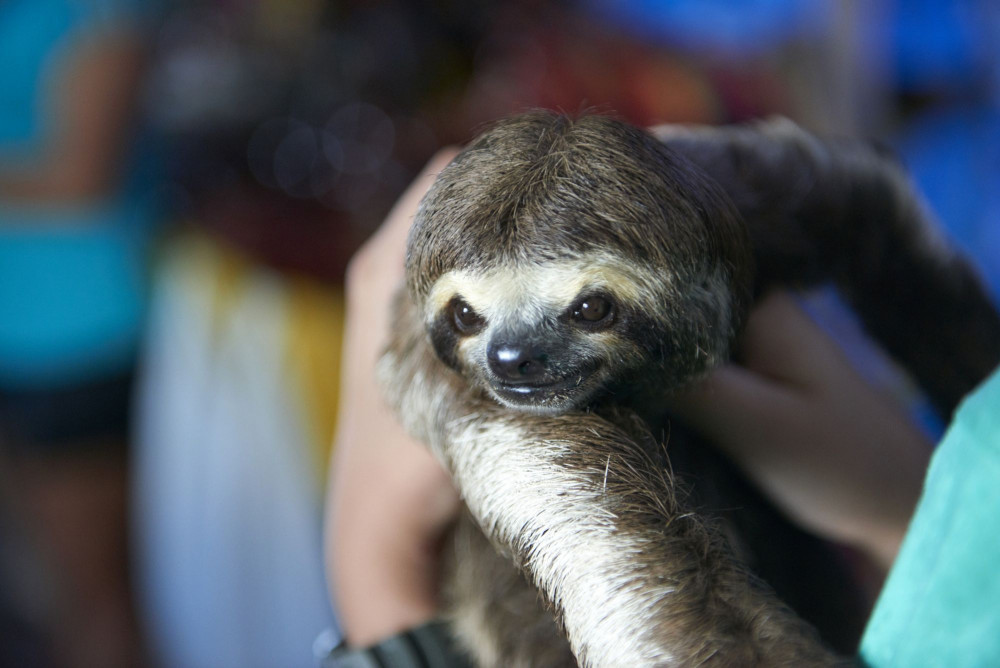 A sloth being handled by a tourist for a photograph in Manaus, Brazil.

Although sloths have long claws that make walking on land difficult, they can move up to three times faster when they swim – surprising for such a typically slow moving character! They can also hold their breath for an impressive 40 minutes, suppressing their metabolism to make their heart rate a third of its normal speed. 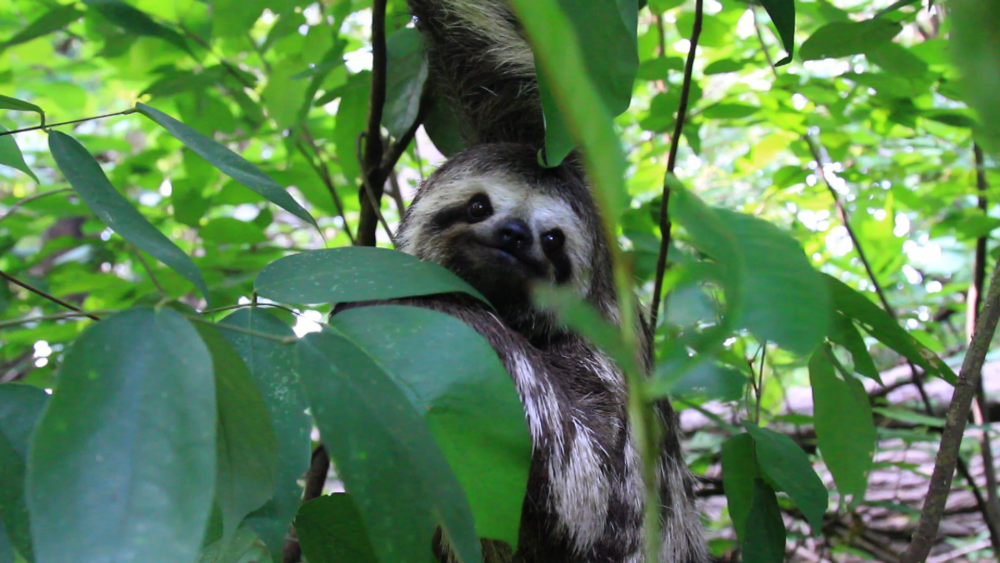 This sloth was discovered tethered to a tree in Manaus, Brazil.

The sloth’s nature allows it to conserve energy, moving slower than any other mammal on the planet. This modest pace means that sloths generally travel no more than 125 feet (38 meters) in a single day, and on the rare occasion that they find themselves at ground level, they crawl only 1 foot (30 cm) per minute. 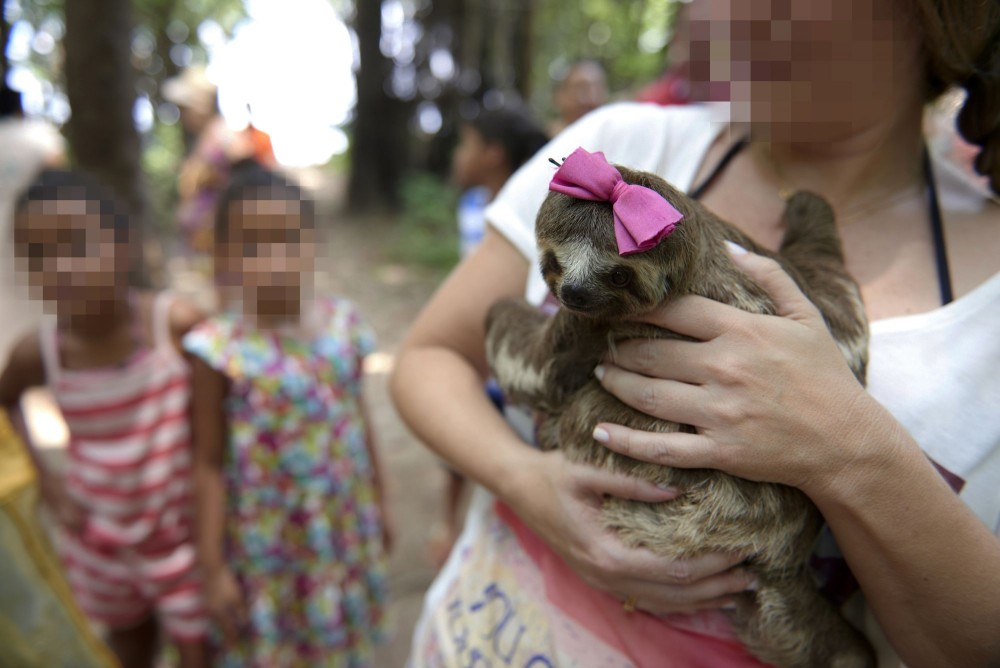 Taken from their natural habitat, sloths are confused and distressed.

The Greek goddess Aergia was the ancient personification of sloth, and was known to sleep often. The sleeping pattern of a modern day sloth is dependent on its habitat, with sloths in captivity sleeping up to 15-20 hours a day whilst sloths in the wild sleep as much as humans, at around 8-9 hours a day. 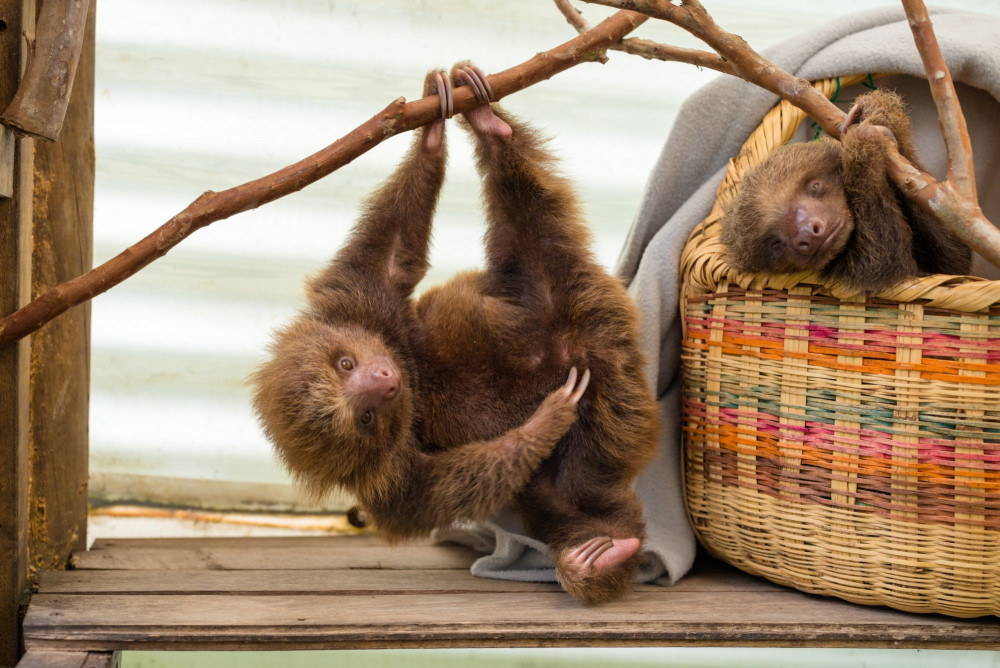 La Negrita and Machito, two baby sloths at the AIUNAU foundation in Colombia.

The facial structure of a sloth gives the appearance that it is constantly smiling – even if it is experiencing pain, stress or anxiety. When sloths are used as a photo prop for wildlife selfies, tourists may accidently confuse this feature for happiness or contentment. 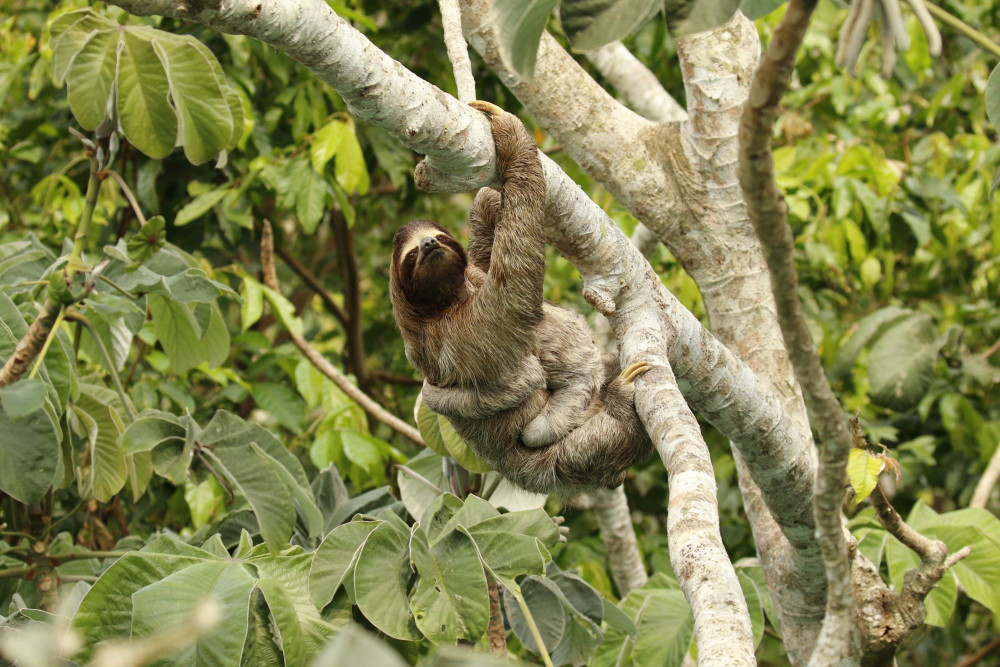 A wild mother and infant sloth in the Sobrenia National Park, which surrounds the Panamá Canal. Image: WDabrowka, KVang @birdexplorers.com

These wild animals are being poorly handled by both guides and tourists alike when used for wildlife selfies. Research shows that sloths are frequently held by their claws or arms with no support at all. Sloths in this situation experience high levels of fear and stress.

They are arboreal, which means that their natural habitat consists of trees and branches. When not being handled by tourists, sloths used in the tourism trade have been observed to be left on the floor or tied up, leaving them very vulnerable.

You can help sloths rescued from a life of cruel captivity by donating towards our projects supporting amazing local rescue centres in Colombia. 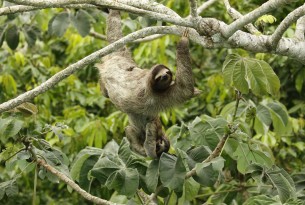 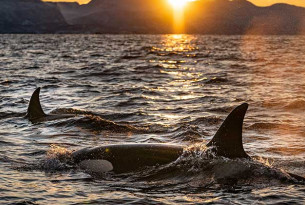