Get to know these amazing scaly animals which have an important role in ecosystems.

Who cares about crocodiles?

Well, we all should, that’s for sure. These amazing animals have been on our planet for around 240 million years. And cultures throughout history, including the ancient Egyptians and the Aztecs, have revered them as important symbols of power, fertility and strength.

Today, crocodiles do a great job in maintaining a well balanced and functioning ecosystem. For example they keep our waterways clean and healthy for many other species. What’s more they are great communicators and surprisingly gentle mothers… 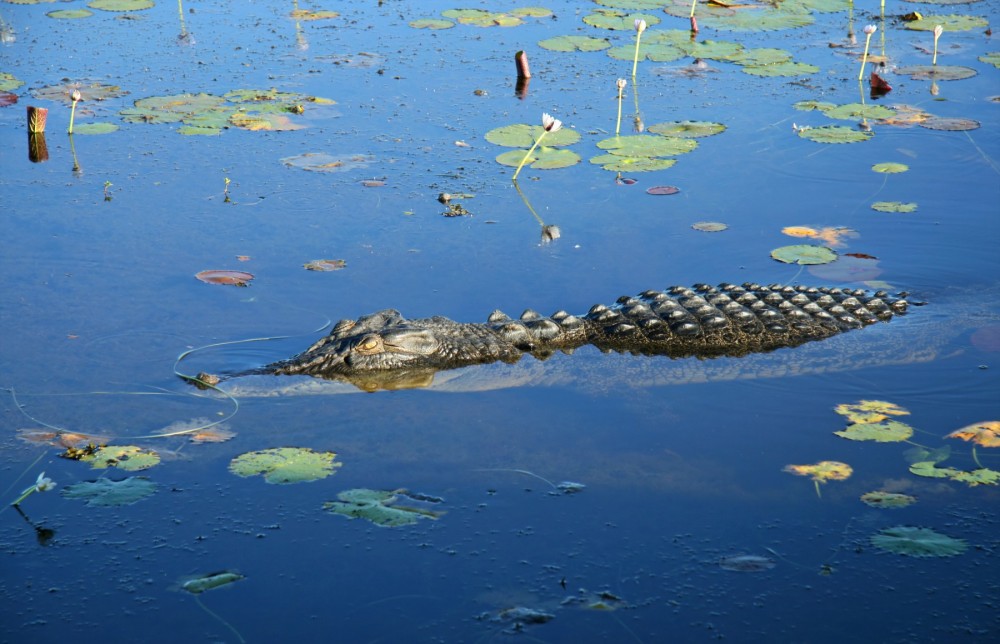 What's the difference between crocodiles and alligators?

Crocodiles and alligators look very similar, but there are some important differences. Crocodile snouts are narrower - more v-shaped and pointed – than alligator snouts which are rounded and shaped in a U. Crocodiles also have a long, lower fourth tooth that sits on the outside of their  closed mouths. When an alligator’s mouth is closed, you won’t be able to see any teeth at all.  Alligators are only found in parts of the USA and eastern China. Crocodiles are more widespread and live in Africa, Australia, Asia, North America, South America, and Central America. 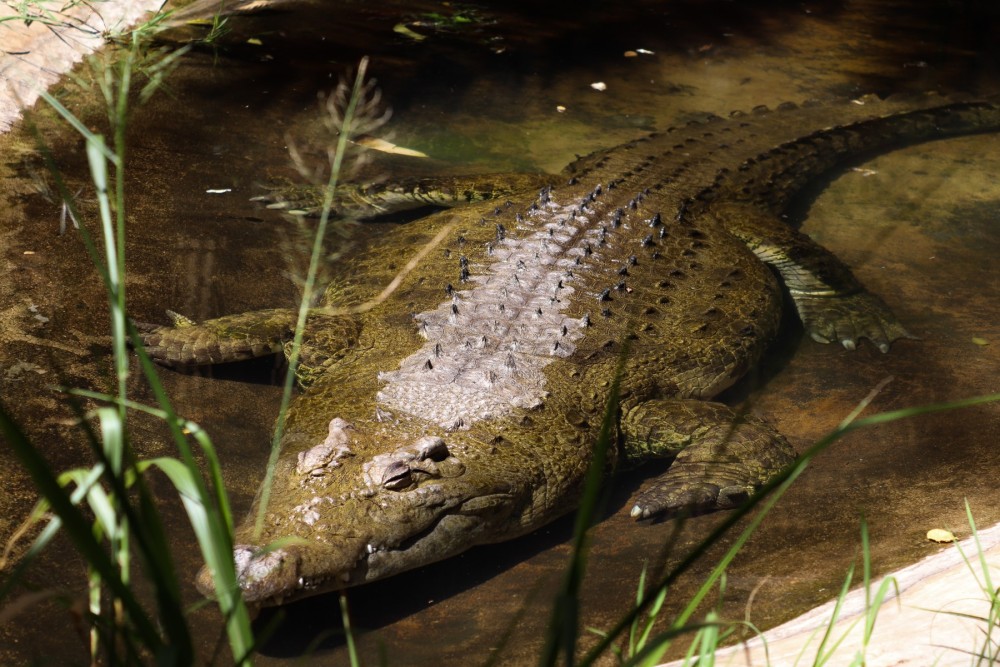 Image: A Nile crocodile in captivity at an undisclosed tourist attraction in Africa.

There are 13 different crocodile (Crocodylus) species. The biggest is the saltwater crocodile, the earth’s largest living reptile. Males can reach more than 7m long and weigh up to 1,000kg. Their extremely powerful jaws, with very long teeth, give the strongest bite in the animal world exerting a force around 1,700kg. When a crocodile loses a tooth, it is quickly replaced. Saltwater crocodile teeth are replaced every three to six months.

The world’s smallest crocodile is the dwarf crocodile which lives in the rainforests and mangrove swamps of West and Central Africa. The dwarf crocodile rarely grows to more than 2 metres  long and weighs around 18–32 kg. So, beside its salty cousin it would look quite tiny! 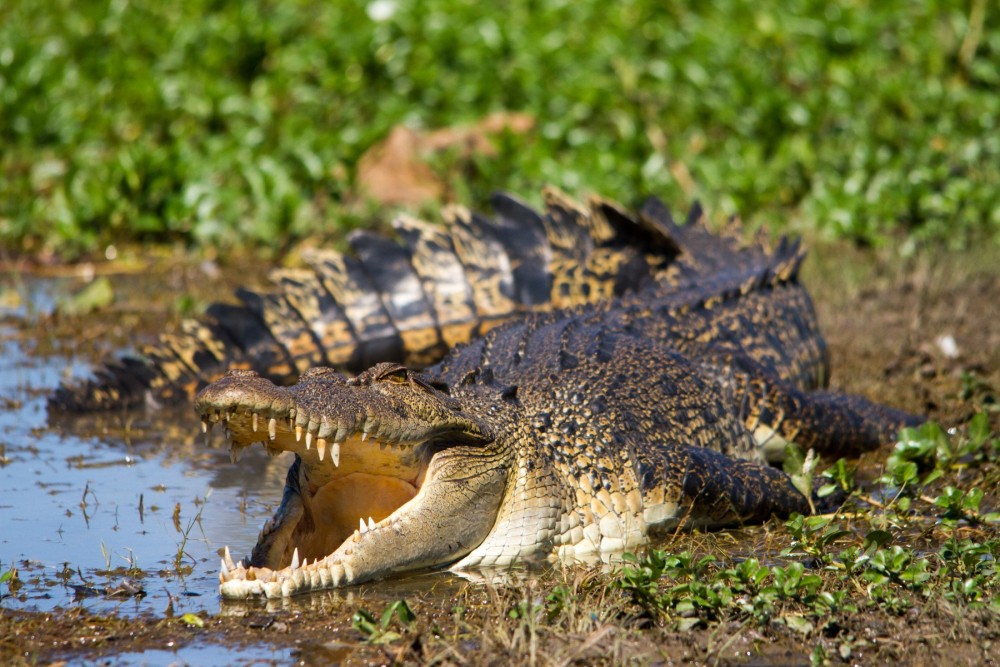 Despite their reputations for being powerful and fierce, crocodiles have a softer side – they are gentle mothers. Depending on the species, female crocodiles can lay from 10–100 eggs, one to five  months after mating. Sometimes they bury them in riverside nests or lay them on the sand. Saltwater crocodiles normally lay 50-60 eggs and  it takes at least 114 days for them to hatch.

Crocodile mothers stay near by their eggs protecting them from predators. When they are ready to hatch – the baby crocodiles croak and the waiting mother starts to dig them up and carries them to the water. She keeps them safe from her sharp teeth. Depending on the species, a mother crocodile can  carry as many as 19 in her mouth at once.

Mother and baby crocodiles ‘talk’ to each other.  Baby crocs can make a sound that sends their mother running to them, and mother crocodiles will give a  certain call when she wants them to come to her.  Professor Nicolas Mathevon from the University of Lyon at St Étienne in France reported an angry, bellowing mother crocodile lunging at his boat when he played a recorded infant crocodile distress call. When he switched off the speaker, she stopped her attack.

How long crocodiles stay with their mothers is dependent on the species. Cuban crocodiles have been reported as staying with their parents for around six months. Yet, Nile crocodiles abandon their young when the babies are just a few weeks.

Only a few crocodiles  hatched survive to adulthood, mate and have babies themselves. This is only around 1% in the case of Saltwater crocodiles which are considered mature at 12 years old. Baby crocodiles are often eaten by crabs, fish and reptiles including snakes,  lizards and other crocodiles. Larger crocodiles are sometimes attacked by big cats, sharks and very big snakes like anacondas.

The lifespan of adult crocodiles depends on the species. Saltwater crocodiles can live more than 70 years, the dwarf crocodile around  40–50. 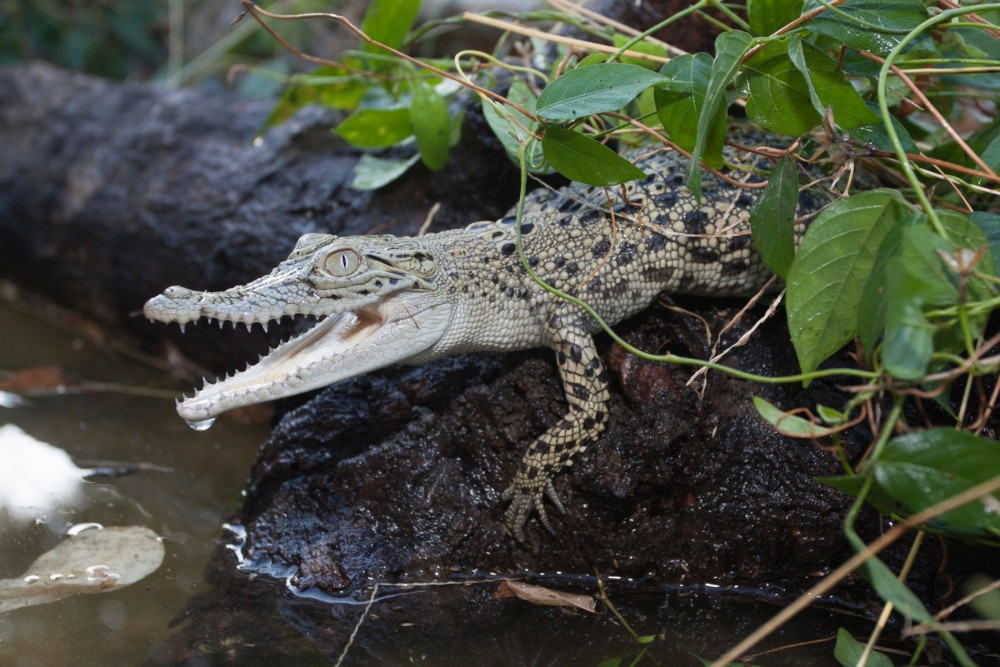 Image: A baby saltwater crocodile at the water's edge.

Crocodiles are the top predators in their environment. They are carnivores and feed on a range of live and dead mammals, birds, fish, molluscs, crustaceans, amphibians, reptiles and insects. They are very fast swimmers – up to 12–15mph in short bursts,  and can hold their breath for around an hour under water.

Crocodiles are often described as ‘ambush hunters’. They’ll wait for fish or land animals to come close and then rush out to attack. And they aren’t particularly intimidated by size. For example, they’ll attack and kill lions, cattle and people who stray onto their territory. Saltwater crocodiles also attack large animals - even  sharks – and sometimes people.

One animal is, however, famously crocodile-proof – the Egyptian plover - or ‘crocodile bird’ – which sits in the mouths of Nile crocodiles and feeds on the food leftovers within. The crocodiles obviously see this free, dental-flossing, symbiotic relationship as very important. They don’t eat the plover. 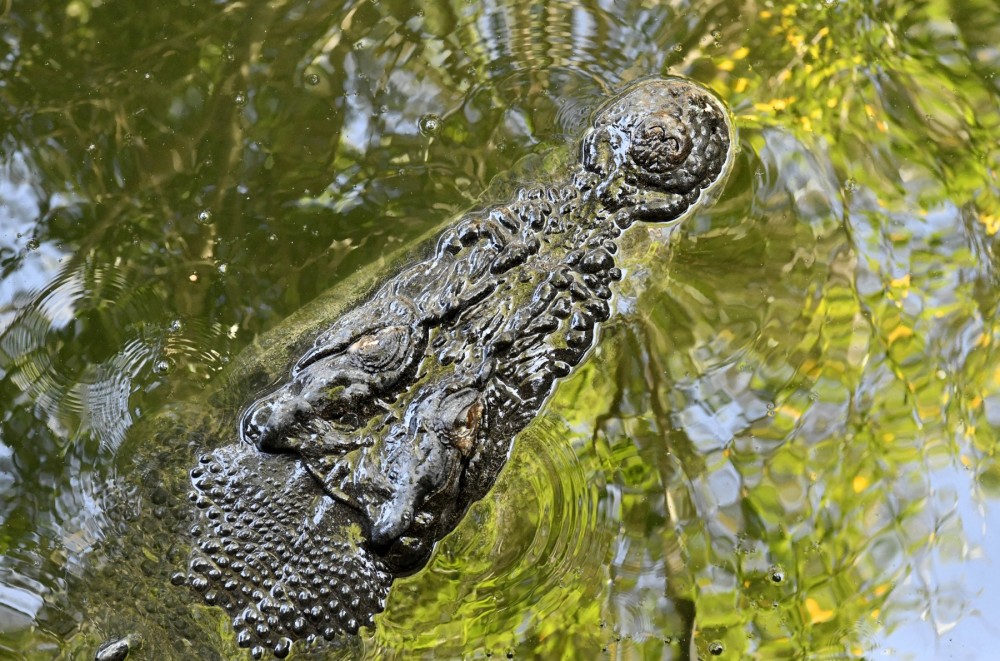 Image: In crocodile farms and tourism venues, crocodiles are kept in crowded, restrictive enclosures and denied the ability to engage in natural behaviours.

Crocodiles have an important role in the environment. As adults they regulate the populations of other animals – stopping them from overcrowding and degrading ecosystems. Crocodiles also create habitats for other animals by burrowing and nest building.  During the dry season, the presence of crocodiles deters land animals from using and drinking the limited water supplies. This protects aquatic life and systems. 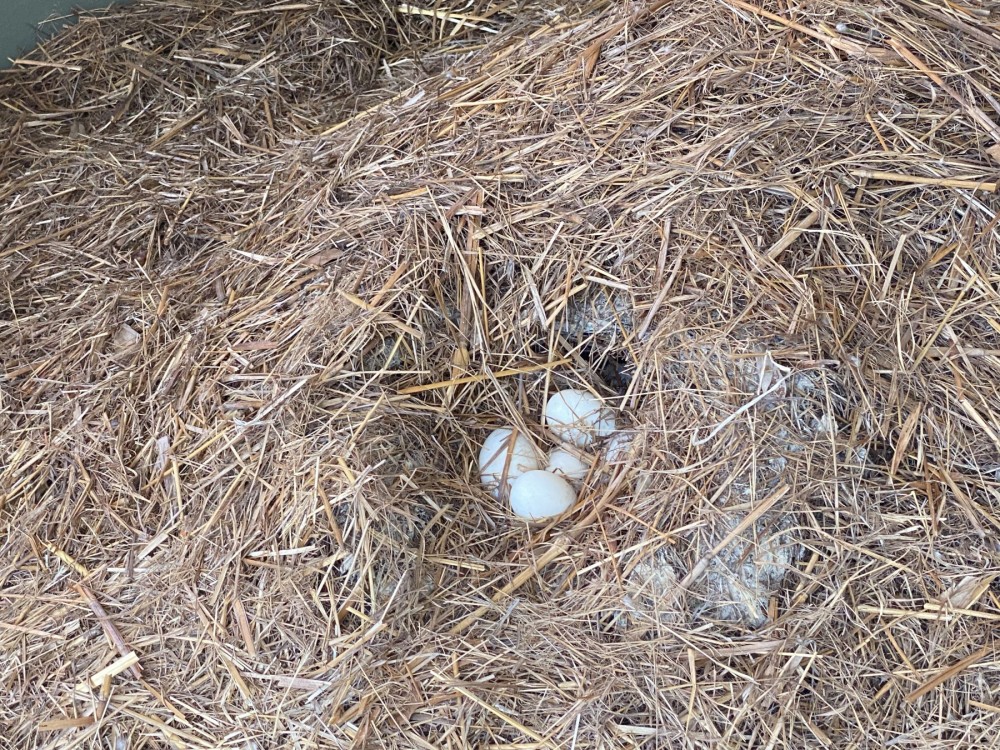 Some crocodile species are endangered and are protected from commercial exploitation  in many parts of the world. This is because during the 20th century demand for crocodile skin products – mostly bags and shoes – meant that crocodiles, including the Orinoco, Siamese and saltwater, were nearly hunted to extinction.

Crocodiles are also threatened in several other ways including: habitat loss through human construction projects;  climate change and capture in fishing nets. They are also killed by people out of fear. 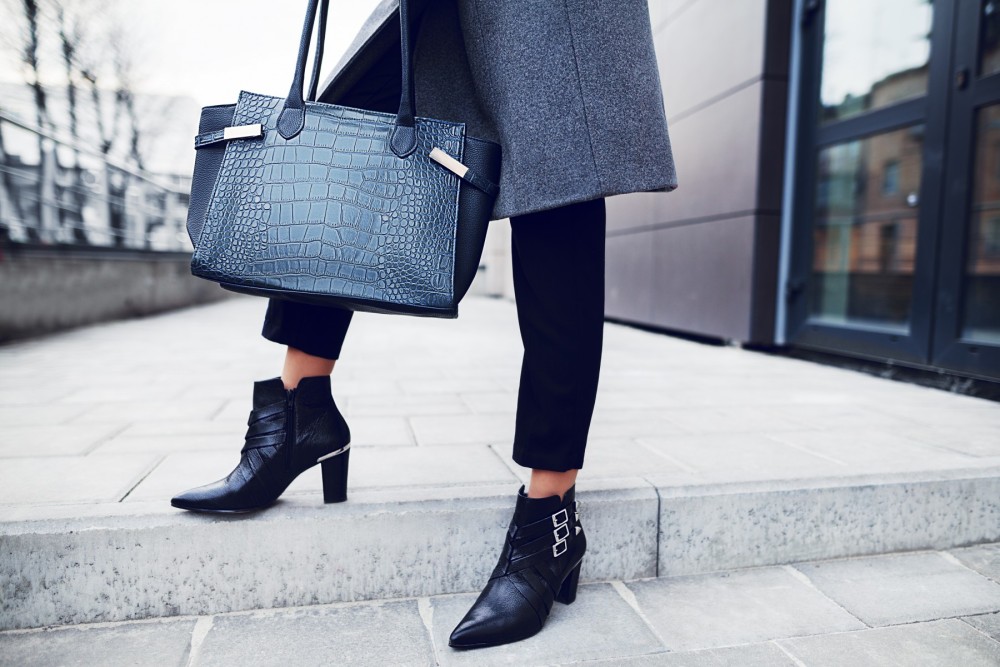 Image: This handbag is made from leather crocodile skin.

Moving the world for crocodiles

With your help we will stop the cruelty that the wildlife trade inflicts on animals. More than 1.6 trillion wild animals are killed and suffer every year because of profit and greed for their use as products or entertainments.

Your support will help us…

Change the systems allowing a sustainable use of wildlife and habitats and make sure wild animals are valued, protected and stay in the wild where they belong. 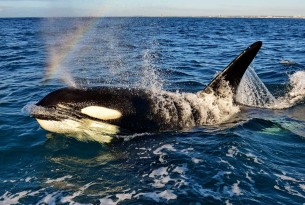